A to Z K is for Kobold

From German mythology, a Kobold is…well is just whatever it wants to be, or needs to be. It can also be invisible. 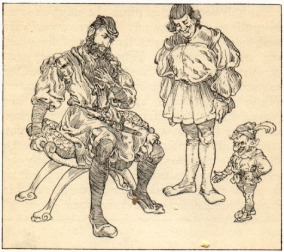 It’s most common forms are  fire, a human, an animal or a candle. They are, in essence, spirits.

There are different breeds of Kobolds. There are the ones that live on land in people’s homes. They dress like peasants and are very helpful around the house. In the old days and on farms they would milk the cows, gather eggs, carry water. If they weren’t fed on time they would become rather malicious and play tricks on the people they served.

The kobolds who live in the mines are said to haunt them.They are ugly creatures, bent over and ghastly looking.

Sailors are not without their own Kobolds, who puff on pipes and dress for the sea.

Salamander shall kindle,
Writhe nymph of the wave,
In air sylph shall dwindle,
And Kobold shall slave.

Who doth ignore
The primal Four,
Nor knows aright
Their use and might,
O’er spirits will he
Ne’er master be.[109]

With a passion for wholesome and entertaining stories, Dianne Lynn Gardner dives into fantasy novels both adult and young adult. She is both a best selling author and an award winning illustrator who lives in the Pacific Northwest, USA. Mother of seven and grandmother of 16, Dianne wants to make sure that books which ignite imaginations, strengthen friendships, spur courage and applaud honor are available to every reader in the world.
View all posts by Dianne Gardner →
This entry was posted in A to Z and tagged A to Z, blog, creatures, fantasy, fantasy child, kobold, magic, myths, stories, tales, wizards. Bookmark the permalink.

7 Responses to A to Z K is for Kobold