I wanted to talk about characters because good heavens, this world is filled with them! 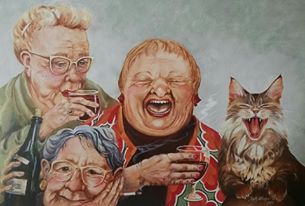 We all have our strange little quirky things that we do, the way we talk, walk, laugh and bat an eye. Maybe it’s our hair that won’t rest against our heads but instead flies around like a mad spider’s web, and we just let it!  It could be our energy, (or lack of) our cool, our crooked smile or laughing eyes. Maybe our voice. Or maybe it’s the clef in our chin or the size of our ears, who knows?

There’s something about you that people remember you by.

Take caricatures, for instance. A cartoon artist has a comical way of portraying public figures so that they stand out from the crowd. I’m sure you’ve seen those funny drawings, especially this election year!

Character is important in novels. Who wants to read a book when the characters are flat and uninteresting or all look the same?

For me, as an author, creating characters is one of my favorite things to do. Whether they are serious individuals stuck in some kind of drama, having to fight a dragon, (the Ian’s Realm Saga) fall through a time portal (Cassandra’s Castle), contend with a Seed company taking over the world (Altered) or mermaids fighting the oil tycoons (Pouraka) I’ve had an interesting time coming up with the characters in my books.

Some of the most amusing characters I’ve created, though are in An Unconventional Mr. Peadlebody. Why? Because the story is a comedy, a vampire comedy, none the less, and I could make these guys over- the-top whacko!

Of course, we have one handsome young half-breed vampire in love with a perfectly sane young lady to hold the story together. But the others?  Yes, they’re nuts! And I had a lot of fun spending time with them!

So some people might be wondering how do I come up with these personalities?

Creating characters isn’t the first thing I do when I begin writing. First I design a premise, that is, a story line. After that I figure out what kind of people need to be involved on all sides of the spectrum; good, evil, and in-between. I have to come up with fellows who will contend with each other and grow, (or fail) as the story progresses. Discovering the protagonist’s weakness and why he can’t succeed (at first) to accomplish his goal, who and what prevents him from moving forward, and how he deals with it will open the door to his, or her personality. The story line will also uncover the personality of the antagonist, because he too will be struggling toward a goal.

Granted, the imagination has to be pretty active when creating these fictional people. Pulling different traits from individuals we know is certainly possible. (That’s why I have a T shirt warning folks to stay on my good side!) The most important thing is that they be consistent in their speech, their actions, the way they dress, and their habits.

Creating characters is enjoyable and I discovered that my fictional characters can be almost as entertaining as those in real life!

With a passion for wholesome and entertaining stories, Dianne Lynn Gardner dives into fantasy novels both adult and young adult. She is both a best selling author and an award winning illustrator who lives in the Pacific Northwest, USA. Mother of seven and grandmother of 16, Dianne wants to make sure that books which ignite imaginations, strengthen friendships, spur courage and applaud honor are available to every reader in the world.
View all posts by Dianne Gardner →
This entry was posted in authors, bloggers, Books, Ebooks, fantasy, Humor, inspiration, life, Mr. Peadlebody, musing, musings, plays, Stories, theater, Vampires, writers, writing. Bookmark the permalink.